Please join Cristina Velazquez at the Palo Alto Art Center
For Repurposed Black—Endless, artist Cristina Velázquez employs VHS tapes as material for large-scale, densely knit sculptures, transforming trash into art. VHS tapes, unsuitable for disposal and unwanted by many, form a major part of the growing landscap of e-waste. But these tapes hold vast amounts of visual information, images, stories and narratives—those created from Hollywood
as well as the ones we’ve recorded ourselves. The record of these narratives, now discarded and abandoned, resonates with a sense of fragility, impermanence, and loss.
In this project, Velázquez will work with the public to collect unwanted VHS tapes, unravel them, and knit them together with community members in “knitting circles” to create unique sculptures.

Here is the article that appeared in the SF Examiner:

Picks for the week of September 8. Coastal Arts League and Museum


Coastal Arts League and Museum in Half Moon Bay. The Peninsula Chapter of Women's Caucus for Art is presenting a show around the theme of water, a theme that resonates more strongly the longer the drought continues.
Some of the most beautiful work is by Alysanne McGaffey who was a part of the Bay Area Figurative Movement of the late 1950s and early 60s, while studying at the San Francisco Art Institute. Like many artists, she was forced out of S.F. but moved down to Half Moon Bay and continues to create, although well into her 80's.
She continues to teach art and painting; for the last several decades focusing on watercolor. She has had numerous solo and group exhibitions throughout her career, is heavily involved in various art organizations and holding offices in several.
In her last show in SF, at the Lost Art Salon, the artist herself curated a group of watercolors depicting a lifelong devotion to the Pacific Ocean and its remarkable vistas. McGaffey's roots in the Bay Area Figurative Movement are still palpable - in palette, stroke, and vibrancy; reminding us of the inherent similarities between the human figure and its environment. With titles such as "Sonoma Coast" and "Rockaway Beach", one can trace McGaffey's Bay Area route of inspiration. Its effects are translated into vignettes of a coastal life, and ultimately, a life lead in pursuit of natural beauty.
Through October 12, 2014
Posted by Admin at 2:16 PM No comments:

Daly City Mayor David J. Canepa attended the opening reception of the WATER exhibit at the Coastal Arts League Gallery in Half Moon Bay.  He had this Certificate of Recognition made for us and the chapter is very proud of this gesture. 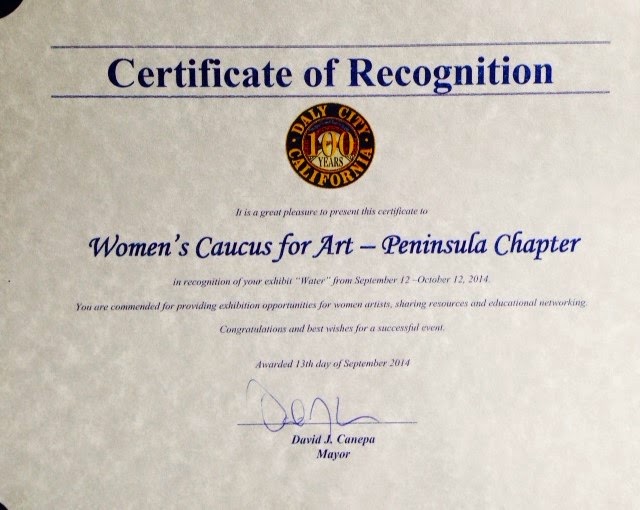 The certificate reads:  It is a great pleasure to present this certificate to Women's Caucus for Art - Peninsula Chapter in recognition of your exhibit "Water" from September 12 - October 12, 2014.  You are commended for providing exhibition opportunities for women artists, sharing resources and educational networking.  Congratulations and best wishes for a successful event.

Thank you, Mayor David Canepa, for attending our reception and giving us this Certificate of Recognition.  We appreciate the gesture!
Posted by Admin at 4:01 PM No comments:

Alysanne McGaffey was interviewed on the Serena and Lily website - here is the link:


http://www.serenaandlily.com/Artist-Spotlight-Alysanne-McGaffey
Posted by Admin at 1:03 PM No comments:

A closing reception will be held on Sunday,
October 5, 2 - 4PM


Cosette Dudley is a printmaker and lithographer.  Her work in this exhibition was inspired by her childhood friend Betty, a young girl of Japanese descent who was forced into an internment camp during WW2.  That brutal action shattered Betty and Cosette’s suburban neighborhood, delivering the cruelty of war right to their doors.  Betty was seemingly erased from the community, her innocence and childhood cut short.  With this exhibit, Dudley creates a link between the historical and the personal, furthering the conversation of erasure by burnishing portions of the images directly off the copper plate.
Cosette Dudley began her printmaking career during the turbulent 1960s.  Her work was highly influenced by her own experiences as a child during WW2,as well as the impact of the Vietnam war on her later life.  Throughout her career she has continued to explore themes of social justice, civil liberties, war and peace, and the environment.
Posted by Admin at 4:12 PM No comments:

WATER  - an exhibit by members of the WCA Peninsula Chapter opens on Friday, September 12 at the Coastal Arts League Gallery, 300 Main St., Half Moon Bay, CA

Reception for the artists on Saturday, September 13 from 5 - 7PM
The event is free and open to the public 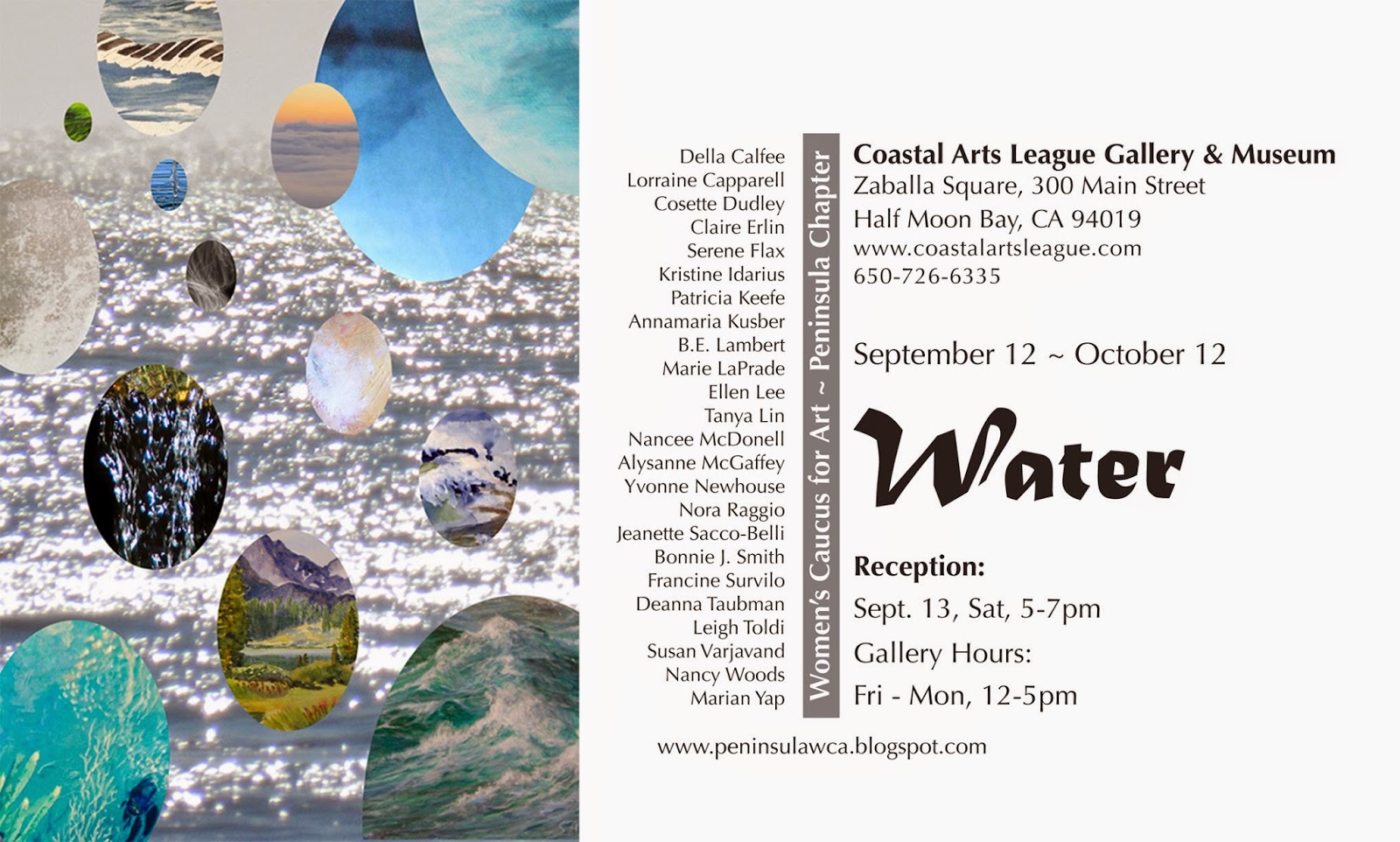